St.Andrews Church stands in a rectangular churchyard overlooking the water meadows of the River ore. It is built from a range of local materials including 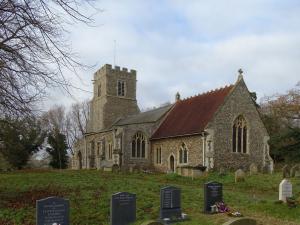 clunch (a hard chalk), field stones, flint, Septaria and brick. Imported Limestone has been used for dressing and decoration.

The list of known Rectors begins in 1319, with Richard, son of Robert, Prior of Ending.

The west tower is C15th plain perpendicular in 3 stages, with flush work in lozenges on the battlements. The South porch is also C15th, with stone and flint flushwork with Trinity and Passion emblems still discernible. The arch has a canopied niche in the gable with “Agnus Dei’ at the apex. The roof is C16th.

The earliest remains in the building are some diagonally tooled dressed stones in the used Norman piers of the nave arcade which was probably rebuilt in the C16th. The south aisle has 3 bays, and the east window is C15th and probably formed part of the earlier aisle. There are two niches in the south wall suggesting the location of a shrine or side altar and a possible reformation date.

The north chancel wall houses an alabaster and black veined marble wall monument to William Alston who died in 1641. It has two coloured oval portraits in relief medallions. The Memorial was in a bad state with the inscription panel having fallen off and broken. In 2006 it was conserved and restored by Antonia Hockton of Hockton Sculpture Ltd. Funds for the restoration were obtained from the Council for the Care of Churches and others.

The south chancel wall houses the memorial to Flora Sandes, daughter of the Revd Samuel Sandes.  Flora was the only British woman to fight in WWI. Initially a nurse, as the Serbian army, to whom she was attached, retreated, she took up arms.  For her valour, she was awarded the Serbian equivalent of the Victoria Cross.  At the end of her life she lived in Wickham Market and died in Ipswich hospital in 1956.

The north wall of the nave has memorials to two members of the Shuldham family, one of whom, Lemuel, died at the battle of Waterloo in 1815.

Currently, during the pandemic, there are a limited number of  services at church, all socially distanced, but this is constantly reviewed by Revd Graham Hedger and the benefice.  Please see Private worship